Learn about leadership through Shakespeare in an engaging way 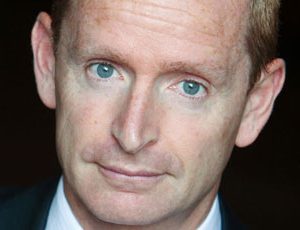 Request fees and availability
Our keynote speaker Ian Hughes is an award winning actor and business coach. He speaks for corporate audiences at conferences, strategy sessions and meetings. Over the past twenty years, Ian has perfected his relaxed conversational style. His passion and energy enable Ian to inform and inspire with audiences at all levels. His topics combine the best aspects and skills of acting with the art of leadership.

Ian Hughes was the winner of the first Royal National Theatre Ian Charleson Award for Best Actor. He has spent over a decade playing leading roles with The Royal Shakespeare Company. His other work includes both plays and musicals in London’s West End, TV and film appearances as well as radio and voice-over work.

Ian has been involved and taught at the country’s leading drama schools, is an Education Associate Practitioner for The RSC and was Head of Acting at St. Mary’s University College, London for two years. Ian obtained his BA from Birmingham University and an MA from the internationally renowned Shakespeare Institute in Stratford upon Avon, and he continues to work on and teach practical approaches to Shakespeare’s text. Recent teaching includes Cambridge University, Zurich University and Heidelberg University.

As a Corporate Facilitator and Business Performance Coach, Ian has worked with organisations and individuals both nationally and internationally. He is also a Senior Associate at That-People-Thing and Taming Tigers, through which he has also worked with a variety of clients to increase impact and performance. Recent clients include The Welsh Assembly Government, AXA, Roche, DX, Legal & General, Lease-plan and Honda.

Ian’s keynote speech – Shakespeare and the Story of Leadership -has regularly been described by delegates as thought-provoking, engaging and inspiring.

Shakespeare and The Story of Leadership

Examining the lessons in leadership contained within the works of one of the world’s great writers, Shakespeare and The Story of Leadership explores how applicable and relevant they are to the modern business leader – proving Ben Jonson’s claim that Shakespeare was ‘not of an age, but for all time’. Ian’s accessible and non-academic approach examines the five leadership lessons within the plays and illustrates how, combined, these lessons elevate Shakespeare’s leaders to greatness, providing a template for the modern leader to write a more engaging business narrative.

How does an award-winning actor become a business speaker?

I am lucky enough to wear three different and distinct hats: actor, business coach and keynote speaker. Each aspect of my work has developed out of the other. As a leading member of The Royal Shakespeare Company for more than a decade, I found I was increasingly invited to work with senior business leaders on personal impact and presentation skills training. A

s I had many Shakespeare lines and themes buzzing around in my head , I would often quote Shakespeare to emphasise my point during business training and was impressed by just how relevant some of Shakespeare’s themes were to the corporate world. As my reputation grew as a facilitator, I found there was an expectation that I would deliver keynote speeches  that explored the  link between leadership and the worlds greatest writer for larger groups at conferences in the UK and globally.

My first keynote was for Government leaders in the UK and since then I’ve enjoyed  speaking for a range of differing audiences. With over twenty years experience as a performer, one of the great advantages I’ve found is that I don’t get nervous about speaking to large conferences which leaves me free to really focus on my audience and what they require.

Can Shakespeare really teach us anything about leadership?

Consider just one key Shakespearean leadership lesson: ‘Tis true we are in danger, the greater therefore should our courage be’. Here’s a 400 year old lesson that you’ll find wrapped up in many a self-help book today, encouraging us, in times of crisis, to act boldly.

There are so many examples of lines written by Shakespeare that still have a remarkable capacity to inform and motivate. With a few exceptions, all Shakespeare’s plays deal with people with position, power and privilege and the theme that Shakespeare  returns to time and again is leadership – what it takes to lead, how successful leaders inspire and motivate and how failed leaders miss the opportunity to understand their followers needs.

The fact that Shakespeare remains as popular today as he did 400 years ago is testament not only to his writing but also to the fact that we are just as obsessed with leadership as Elizabethan audiences were : tap ‘leadership’ into Amazon books and you get 49,916 results! If Leadership is being discussed then, it’s seems odd to me not to mention Shakespeare!

What type of audiences benefit most from your talks?

What’s great about using Shakespeare as a starting point is that everyone has, at some point or other, come across him – either as a student in the classroom or as a theatre-goer. As I steer away from an academic approach and relate the lessons that Shakespeare’s leaders learn to the modern business leader, it seems that everyone has something to gain from brushing up their Shakespeare!

The key indicator for me in how relevant and useful my keynote has been, is the overwhelmingly positive feedback I receive and also the emails from business people who , as a result of hearing the speech, have lines of Shakespeare as their screen-saver or quotes from the plays pinned to a notice-board or refrigerator door.

For senior business people the leadership lessons obviously resonate but  audiences of all levels gain a deeper understanding of how they are led and what attributes they might require to become leaders themselves.

Can you give 3 characteristics that you feel define a great leader?

Consider Henry V, Shakespeare’s great heroic leader who proves his worth by taking England to war with France. Henry’s leadership is defined by the understanding that he has to engage his troops on three fronts – head, heart and guts. And nowhere is there a better example of how motivation can be achieved in difficult times than in Henry’s ‘Once more unto the breech ‘ speech ( a speech I use in Shakespeare & The Story of Leadership)

Head: Henry makes his soldiers think by not only calling them on to action but alerting them to the consequences of inaction – of doing nothing. Heart: he invokes emotion and makes his soldiers feel but reminding them of their mothers and fathers back home in England.

Guts: Henry motivates his troops to act but stating he doubts not for a moment the valour of each and every one of them. When Head, Heart and Guts combine, the resulting leadership message is unforgettable. It’s why we remember Martin Luther Kings ‘I have a dream’ speech: the same Shakespearean template is used.

It’s a fascinating process to examine current political and economic leaders and see where they excel and which part of the equation – head, heart or guts – is missing from their house-style!

How do you typically work with clients when preparing your keynote?

I haven’t climbed mountains or won an Olympic Gold (yet!) so clients approaching me tend to want a different approach to the issue of Leadership to enable their delegates to consider their own leadership style in a new light. My keynote is flexible and can focus on specific areas of Leadership and once a client has highlighted specific areas they’d like to focus on, I can adapt accordingly.  The other key area we discuss is how much interactive material is included. From experience, delegates love the opportunity to speak some of Shakespeare’s great text out-loud – something they may not have done since they were teenagers!.