Break through the odds to a fulfilled life 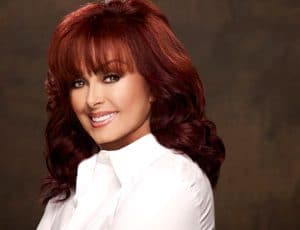 Request fees and availability
From humble beginnings as a single Mom in a small Kentucky town to her meteoric rise as a country music superstar and American icon, keynote speaker Naomi Judd's incredible lifelong journey is an inspiring story of overcoming the odds through optimism and hard work.

“Whether I’m expressing myself through writing a song or a book or I am speaking at an engagement. Finding a way to share our common experiences is my grand passion.”

Naomi Judd was first known to the world as half of country music’s mother/daughter duo, The Judds. Reaching unprecedented success throughout the 80’s and 90’s, The Judds sold 20 million records, scored fifteen #1 hits and received over sixty industry awards, including six Grammy’s and seven consecutive CMA Vocal Group of the Year awards and the ACM’s Top Vocal Duet award. At the pinnacle of their career, Naomi was stricken with Hepatitis C, a potentially fatal chronic liver disease, incurred from an infected needle when she worked as a registered nurse cutting short her musical career and forcing her into retirement to battle the disease. The Judds bid farewell to the fans in 1991, but Naomi did not step out of the public spotlight for long.

In 2004, her self-penned bestseller, Naomi’s Breakthrough Guide, 20 Choices to Transform Your Life, remained on The New York Times best-seller list for over eight weeks. In 2005, Naomi wrote her third children’s book, Gertie the Goldfish, and in 2006, The Transparent Life hit the shelves. Hallmark Channel tapped her to host, Naomi’s New Morning, a weekly talk show that aired 2005 to 2007. In 2007, Naomi released yet another best-seller titled Naomi’s Guide to Aging Gratefully which was a message of empowerment to the millions of Baby Boomers in this country. She also served as spokesperson for Partners Against Pain, Post Cereal’s “Heart Health” campaign, Prilosec and AARP. And coming back to her musical roots, she helped launch CMT’s reality competition hit, Can You Duet as a talent judge for two seasons (2008-2009).

She also used her story of survival of Hepatitis C to serve as the first national spokesperson for the American Liver Foundation. Using her fame, her experience as a former RN and her passion to help people, she’s re-directed energies into communicating her learnings and research through educating audiences about the scientific link between mind, body and spirit in the healing process as a keynote speaker which she actively continues today.

In a full circle moment in 2010, Naomi and Wynonna took to the road a decade after their first goodbye for “The Judds:  The Last Encore Tour” and released a new single, “I Will Stand By You.” Chronicling that experience was a hit docu-drama, The Judds, which premiered April 2011 on OWN:  Oprah Winfrey Network and was quickly a top 3 show for the network. Cameras captured their emotional journey as they worked to heal their relationship, reconnect with the fans and share the spotlight once again.  The tour was extended into 2011 with 13 more dates.  Naomi also returned to acting to co-star in Lifetime’s original movie based on the bestselling crime novel, The Killing Game, by Iris Johansen in Fall 2011.

Eight Characteristics of a Survivor

How to Have a Breakthrough, Not a Breakdown

30 Ways to Live the Transparent Life

Creating Health, Wealth and Happiness from Nothing