Thought-provoking keynotes on entrepreneurship, business and the future 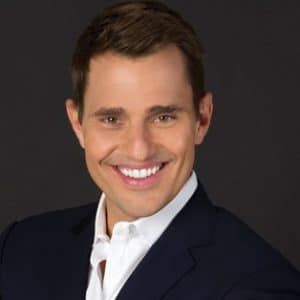 Request fees and availability
Speaker Bill Rancic is a keynote speaker enlightening audience members on entrepreneurship and business advantages throughout the country. Several years after his introduction to America as Donald Trump’s original Apprentice, speaker Bill Rancic continues his commitment to entrepreneurship all over the country. He builds businesses and seizes grand opportunities as he shares his views on obtaining success and building businesses.

Speaker Bill Rancic bursted on to the scene as NBC’s first Apprentice,  and since then, has traveled to every part of the globe, sharing his life experiences and business acumen with tens of thousands of leaders, businesses, and organizations on a variety of essential topics. His expertise ranges from why some companies thrive in chaos — and others don’t — to the leadership behaviors needed in a world beset by turbulence, uncertainty and dramatic change

At the early age of 23, Bill Rancic established the successful company, cigarsaroundtheworld.com, in a 400 sq. Ft. studio apartment. Today, it is a thriving multi-million dollar national operation, in which Bill is a shareholder in the company and sits on the Board of Directors. The son of educators, he is a true entrepreneur, who helped earn his way through college by starting a boat wash and wax business in the Chicago area.

When not on television, Bill is traveling around the world talking to corporations and universities about “thinking like an entrepreneur” as well as teaching corporate America how to help preserve the environment.

Speaker Bill Rancic has invested nearly two decades living the topic, Rancic has authored four books. These include New York Times best-seller You’re Hired: How to Succeed in Business and Life, Beyond the Lemonade Stand, In addition, Rancic co-authored I Do… Now What? With celebrity wife Giuliana Rancic. He also just penned his novel, First Light.

Bill also sets aside much time to work with young people at risk. Two of his most significant causes are The Mercy Home for Boys, of which he is a board member and mentor to underprivileged kids, and The National Children’s Alliance for abused children, which he co-chairs an annual fundraiser with Olympic Gold medalist Picabo Street.

The Pause and Pivot Method

What makes Bill different is his adaptability in an ever-changing business world, and his willingness to adopt strategies that reject conventional wisdom in the industry. He has been shaking up the old school business model from his first job out of college to his latest restaurant opening. This separated him from the pack while he crafted a personal and professional brand that has now established him as a household name. Now, your employees and business audiences worldwide can learn how he did it, right from the source

Bill’s presentation will include a variety of success methods, including the new Pause and Pivot Method, created exclusively by Bill for these engagements.

On behalf of Fiserv, it is with sincere appreciation that I thank you for your recent participation as our motivational speaker at the employee event in Lake Mary. Not only were you inspiring, but your stories left the audience with much-needed enthusiasm. We were particularly pleased with your ability to incorporate the specific words and phrases we had previously mentioned seamlessly into your presentation

On behalf of the High Desert Opportunity Committee, thank you for speaking at our October conference. The information you provided was exceptional because it works on both a business and personal level… I also wanted to thank you for being so kind and accommodating to our attendees during the meet and greet.

Sublime, Masterclass, Masterful, Insightful. From moving from a business leader of a Fortune 1000 company to an 18 year-old athlete to a panel of celebrities from different walks of life - no one but Bill Rancic can pull that off. I mean NO ONE.