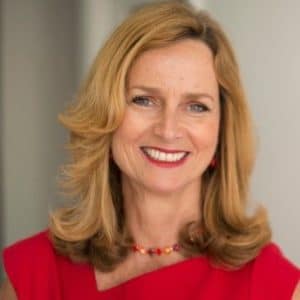 Founder of RedBalloon, Co-Founder of The Big Red Group & ‘The Red Shark’ on Shark Tank Australia

Naomi was a dynamic, energetic and passionate speaker. She presented powerful and clear messages that not only resonated because they were personal accounts, but also provided a refreshing and honest viewpoint. It was also incredibly exciting to see a female all-rounder who has persevered and achieved such amazing success. Naomi was easy to work with, not demanding at all, and is definitely someone we would love to have join us again.

Request fees and availability
Speaker Naomi Simson is a co-founder of Big Red Group, allowing people to experience life differently. Naomi is a well sought-after, successful entrepreneur striving to help organizations obtain and maintain success. Naomi is a business commentator, prolific blogger, and best-selling author, just as she is a business influencer directing into business and personal development.

Why you should book speaker Naomi Simson

As one of Australia’s most prominent entrepreneurs, speaker Naomi Simson is the co-founder of the Big Red Group. BRG houses a number of brands including RedBalloon, Adrenaline, IfOnly, Albert AI (Marketics), and Redii.com with the purpose of shifting the way people experience life. Having founded RedBalloon in 2001, Naomi is a pioneer of online marketplaces and the Experience Economy. RedBalloon is one of Australia’s great entrepreneurial success stories with Hitwise identifying the business as the third-largest experience marketplace in the world. Naomi is passionate, inspiring, and determined – a colorful speaker with rich and vivid stories – she challenges audiences to think differently and is one of Australia’s most sought-after speakers.

Naomi is a passionate supporter of Australian businesses, a prolific blogger and business commentator, best-selling author, and much sought-after keynote speaker. She has appeared in four seasons of the Australian Shark Tank as the #redshark.

A true business influencer and leader with more than 2.8 million LinkedIn followers, Naomi is Australia’s most-followed person on the business networking platform. She has authored two best-selling books Live What You Love, and Ready to Soar, and is an engaging and insightful speaker. Naomi is relatable across a broad variety of audiences and topics, often drawing on her own personal experiences to provide thoughtful and valuable views into topics, including Influence, purpose, leadership, entrepreneurship, personal development, customer obsession, and digital marketing transformation.

Before founding RedBalloon, Naomi worked for big businesses including IBM, Apple, KPMG, and Ansett Airlines – all of which influenced her passionate views on workplaces.

Naomi has received a number of high-profile awards including the National Telstra Business Women Awards for Innovation (2008), Ernst and Young Entrepreneur of the Year Industry category winner (2011), and the Lifetime Achievement Silver Stevie Award (2013). In early February 2017, Naomi commenced her role as a member of the University of Melbourne’s Faculty’s Business and Economics Board.

Entrepreneurship has a certain romance to it. Here, Naomi will debunk this myth, and others, and share what it takes to keep your eye on the prize. Naomi Simson started her entrepreneurial journey when she founded online experience brand RedBalloon in 2001, with a clear view of what she stood for. She has now co-founded the Big Red Group, which serves and experience every minute and turns over more than $100m.

In this colourful and inspiring keynote, Naomi explores the challenges faced by many businesses that are ever fearful of disruption. With retail closures being reported daily, Naomi spells out her approach to ‘protection from disruption,’ and speaks to the value chain each business must build.

Live What You Love – Personal Development

This keynote is all about fulfilling your true purpose. Being an entrepreneur is not for everyone, but knowing what drives you will give you the platform for a rich and wonderful experience of life. Naomi will share real and vivid stories from her personal and business life to demonstrate the power of her personal motto, ‘If it is meant to be, it is up to me.’ The one word we consistently hear after this session is ‘inspirational’. You will be inspired to take action.

In this challenging keynote, Naomi explores how to influence other people’s views, behaviors, and opinions. Emotional connection and storytelling are critical to the ability to influence and unite teams. Leadership and management are uniquely different and often people meld the two. She gives practical tips on what works best, pointing out that it’s not about trying to ‘convince’ someone, but creating the environment for people to thrive.

Audiences will be left better equipped to impact those around them.

‘Experiences’ is a term used for everything from customer experience, to the employee experience – it is used to denote the human element or emotional connection created.

Every business is impacted by the phenomenon of #AccessOverOwnership and the Experience Economy. Businesses need to shift from being in the transaction game (the right product in the right place at the right price) to be in the experience game. Naomi urges audiences to consider whether they offer an experience that will engage, entertain, build trust and create an emotional connection with their business.

There was so much about Naomi's session that really resonated. Naomi's authenticity and her lessons around the importance of engaging and empowering our people, listening to our customers, knowing yourself and the role of leadership were all talked about for the remaining days of our conference. It was such a great talk around the importance of vision and values and the feedback I got afterwards from the team was overwhelmingly positive. We loved all of it and are very fortunate to have had Naomi at our session.

In a sea of potential presenters, Naomi Simson is one of the best there is. During her keynote she created considerable interest with RedBalloon and other examples, but also demonstrated a deep knowledge of business, people and organizational issues that people at management level related to and were able to learn from. There was an overwhelming sense of warmth and satisfaction after the events, much of it based on Naomi being a living example of what she preaches and putting it within reach of others.

Naomi was a dynamic, energetic and passionate speaker. She presented powerful and clear messages that not only resonated because they were personal accounts, but also provided a refreshing and honest viewpoint. It was also incredibly exciting to see a female all-rounder who has persevered and achieved such amazing success. Naomi was easy to work with, not demanding at all, and is definitely someone we would love to have join us again.