Experience the advantages of innovation and creativity 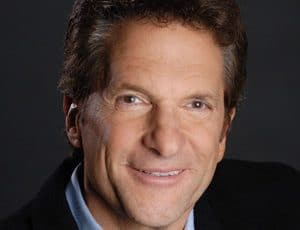 Request fees and availability
Our keynote speaker Peter Guber is the chairman and CEO of Mandalay Entertainment and the Co-Owner of the NBA's Golden State Warriors.  With a 40 year career as an executive and entrepreneur in the entertainment, communications and sports industries, Peter provides market leaders with the tools to lead more persuasively, manage more effectively, inspire greater creativity and foster deeper collaboration.

Why you should book speaker Peter Guber

Peter Guber has spent his entire life blazing his trail. From movies to music to television to sports, he has seized the opportunity and been a pioneer in businesses and industries that are notoriously difficult. A successful executive and entrepreneur in various sectors, he has deep strategic and operational experience with universal application.

Peter Guber’s career has been fueled by curiosity and personal reinvention. He is Chairman and CEO of Mandalay Entertainment Group. Prior to Mandalay, Peter was Chairman and CEO of Sony Pictures Entertainment, Chairman and CEO of Polygram Entertainment, Owner and Co-Founder of Casablanca Record & Filmworks and President of Columbia Pictures. He produced or executive produced (personally or through his companies) films that garnered five Best Picture Academy Award nominations (winning for Rain Man) and box office hits that include The Color Purple, Midnight Express, Batman, Flashdance, The Kids Are All Right and Soul Surfer.

Peter is operating Owner of the three-time NBA Champion Golden State Warriors, an Owner of the six-time National League West Champion, and two-time National League Champion, Los Angeles Dodgers, and an Owner and Executive Chairman of Major League Soccer’s Los Angeles Football Club (LAFC). He is Co-Executive Chairman of aXiomatic, a broad-based esports and gaming company that owns Team Liquid, a premier esports team. Peter is a Regent of the University of California and has been a professor at UCLA for 40 years.

Peter is a noted author with works including Shootout: Surviving Fame and (Mis)Fortune in Hollywood, which became a 7-year television series on AMC, which he hosted. He wrote the cover article for the Harvard Business Review titled, The Four Truths of the Storyteller. His most recent business book, Tell To Win – Connect, Persuade, and Triumph with the Hidden Power of Story, became an instant #1 New York Times bestseller.

“The most successful companies and leaders must generate new ideas, unleash the creative talent of their people, move innovative thinking throughout their organization, overcome resistance, and have an accelerated time to market that leaves competitors in the dust.”

Like it or not, we live in a disruptive world. Whether the disruptor is a competitive organization or customers who are choosing alternative solutions, regardless of how established your business is – you’re vulnerable. Businesses today have two choices: you can either be the disruptor or be disrupted.

The call to action is to be a challenger to your own incumbency, to lead the charge to innovate and transform and add the greatest value to your industry before someone else does.

Culture, curiosity and communication have been the three cornerstones that have fueled Peter Guber’s ability to win in diverse industries.

“Perhaps the worst mantra is ‘if it ain’t broke don’t fix it.’ With the exponential rate of change today, if it ain’t broke, you must be willing, as an incumbent, to break it yourself, because if you don’t, your challenger will. Change is inevitable. Growth is optional.”

The Power of a Purposeful Story

The ability to tell a purposeful story well is a highly powerful and vastly underutilized professional business tool. It is indeed the secret sauce that can propel success. Unfortunately, by the time most people have entered business, stories, as professional tools, have been dismissed as too soft and have been replaced by soulless bullet points and forgettable data. Yet, only

Thriving in a Culture of Risk

The rapid changes reshaping business today require leaders who stay ahead of the curve, embrace uncertainty, overcome FEAR (“False Evidence Appearing Real”), and take informed risks by “flying in the red zone” where failure lurks, but a greater opportunity horizon lies. Peter Guber credits much of his tremendous business success to heeding these navigational stakes.

The new “normal” is that the world is volatile, turbulent, and perpetually uncertain. Achieving success in today’s high-consequence, highly uncertain.

In today’s marketplace, they must seize change – drive change – to stay in the game.

Keen On... Peter Guber: The Story of His Life