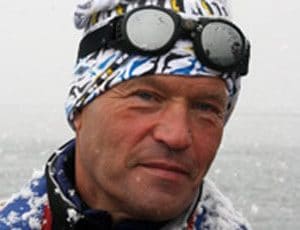 Request fees and availability
Regarded by many as one of the world’s top motivational speakers, keynote speaker Robert Swan's experiences from the past 25 years have evolved into an exceptional and dramatic story of success, failure, the ability to learn from one’s mistakes and ultimately, inspiring others to pursue their dreams. In his talks, Robert Swan emphasizes the importance of inspiration, leadership and teamwork.

By age 33, Robert Swan, OBE became the first person to walk to both the North and South Poles, earning his place in history alongside the great explorers and adventurers. His 900 mile journey to the South Pole, ‘In the Footsteps of Scott’, stands as the longest unassisted walk ever made on earth.

During his expeditions, Swan experienced firsthand the effects of global warming at both Poles.  In Antarctica, his eyes forever changed color after prolonged exposure under the hole in the ozone layer. In the Arctic, his team survived near-death encounters in a melting ocean, prematurely caused by global warming.

These powerful experiences only helped to shape and focus Swan’s lifetime goal: working towards the preservation of Antarctica as the last great wilderness on earth.

In 1992, Robert was the Keynote Speaker at the first ‘World Summit for Sustainable Development’, where he addressed world leaders and was charged with undertaking a 10 year global and local environmental mission which would involve industry, business and young people.

Ten years later in 2002, Swan reported back to world leaders at the second World Summit. He had successfully completed all of his promised missions, including numerous international, youth-driven clean-up projects in Antarctica and Africa. A true visionary at heart, Swan committed to a third 10 year mission, this time to inspire youth to become sustainable leaders and promote the use of renewable energy throughout the planet.

In March 2008, Robert Swan, OBE made Antarctic history again by living solely on renewable energy at the E-Base for over two weeks. Successful in the world’s harshest climate, the positive message Swan sent to the world was “This is possible in Antarctica, and surely it is possible in the ‘real world’!”

Robert Swan, OBE is an exceptionally gifted communicator and has an uncanny ability to motivate those around him into action. His unique insights and life experiences inspire and educate business leaders and young people around the world, and he clearly translates his icy experiences at the Poles to delicate maneuvers in the boardroom.

Robert speaks on various of topics such as:

Leadership on the edge: Robert Swan at TEDxUNPlaza