Get unique insights into the future of digital media 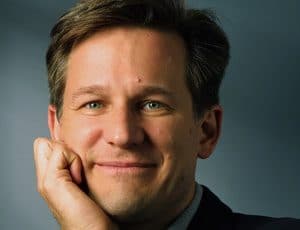 Request fees and availability
Keynote speaker Robert Tercek is a highly demanded speaker to address the subject of transformation and innovation in the information economy.  With more than 25 years’ experience he is one of the world’s most prolific creators of interactive content and has crated breakthrough entertainment experiences on every digital platform.

Rober Tercek’s motto is ‘Inventing the Future’ and with more than 25 years’ experience creating new services around the world he has unique views on managing innovation. His business strategies are shaped by his own personal experience as a pioneering executive for MTV, Sony and OWN, and as an entrepreneur in disruptive startup ventures.

Robert Tercek is one of the world’s most prolific creators of interactive content. His achievements include several milestones: the first multichannel television service in Asia (STAR TV in 1991);  the first multiplayer Java games on the Web (Sony, 1997);  the first interactive game shows on US Television (Sony, 1999); the world’s first streaming video service on mobile phones (PacketVideo and NTT DoCoMo’s V-Live, 2001); the largest audience for live interactive video events on the web (Oprah Winfrey’s 2009 web casts);  the most popular free book download in history (Suze Orman on Oprah.com, 2009). Rob was named one of the “25 Executives to Watch” by Digital Media Wire in 2009, and one of the ‘digital dozen’ most influential players in new media by variety.

Many companies seeking to enter the network entertainment market have gotten strategic advice and insight from Robert. These companies include: Nokia, Motorola, Sony Computer Entertainment, and many others. He has served as an advisor to several successful startups such as BrightCove, Sulake Labs/Habbo Hotel, M.Metrics (acquired by Comscore), MediaCode/Muse.net (acquired by Yahoo) and NevenVision (acquired by Google). He has also supervised new media strategy and the creation of online programs for many of the world’s leading motivational speakers and authors, including Oprah Winfrey, Anthony Robbins, Suze Orman, Debbie Ford, among others.

As a speaker he is in high demand and is an enthusiastic advocate of the future of media and entertainment. He is passionate about inspiring people to seize their own destiny by thinking creatively and taking decisive action. He has led teams to achieve major milestones, including the launch of breakthrough products on every digital platform.  In 2012 he was the first ever guest keynote speaker at the annual strategy meeting for Reed Exhibitions. Some other examples where he has been a featured speaker include E3 Expo, Sundance Film Festival, X Media Lab, 5D New Television, Tokyo Game Fair, MIT’s Future of Entertainment, The New York Games and Mobile Conference, and many private corporate events.

Robert serves as an adjunct professor and lecturer at the University of Southern California’s School of Cinema-Television, where he introduced the curriculum for interactive media, and served on the faculty of the Peter Stark Producers program.  He has also been a guest lecturer at several universities and colleges in the US and abroad.   In 2008, he was named a Fellow of the Royal Society for the Arts in recognition of his achievements in social media for the benefit of society. He is a voting member of the Academy of Television Arts and Sciences, and contributed to the founding of the Interactive Media Peer Group at ATAS.

Although currently living in Los Angeles, he has also lived and worked throughout Europe, Asia and the Americas.