Learn about innovation and success - the YO! way 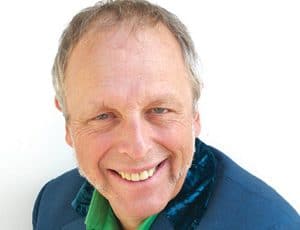 Founder of the YO! concept who has spent 30 years in the entertainment business designing and staging concerts

Request fees and availability
Keynote speaker Simon Woodroffe created YO! Sushi and appeared as a Dragon on the first series of Dragons’ Den. His early career was spent on the road with the likes of Rod Stewart and The Moody Blues before becoming a stage designer. After a spell in television, he conceived and launched YO! Sushi in 1997. The business established conveyor belt sushi bars featuring call buttons, robot drinks trolleys, self heating plates and other such novelties.

Entrepreneur and Founder of the YO! concept

Simon left school at the age of 16 and spent 30 years in the entertainment business designing and staging concerts for many artists including The Moody Blues, Madness, Rod Stewart, Stevie Wonder and George Michael.

In the 90s, Simon went into television spearheading the development of television deals to show huge international rock concerts worldwide, including Nelson Mandela and Amnesty International concerts and the Prince’s Trust concerts.

In 1997, Simon founded YO! Sushi, a conveyor belt sushi bar. The concept turned eating into a complete entertainment experience featuring call buttons, robot drinks trolleys and Japanese TV. The first restaurant opened on London’s Poland Street and became an overnight phenomenon. Today, YO! Sushi continues to expand both at home and abroad operating  in 60 countries and serving over 3 million customers each year.

As a result of his entrepreneurial success, Simon has developed a strong reputation on the worldwide public speaking circuit. Simon speaks openly avoiding business cliché and audiences find his story extremely inspiring and a catalyst for their own endeavours, be they in a large corporate setting or working at a start-up level.

Simon is developing new YO! brands.  YOTEL, the world’s most revolutionary hotel opened in 2007 and in Summer 2011 celebrated the launch of a 669 bedroom site in central New York.  YO! Zone: a spa concept, and YO! Home: residential property are in development.