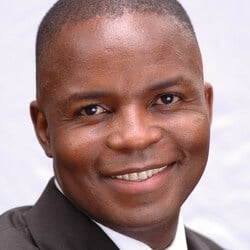 Request fees and availability
Keynote speaker Thebe Ikalafeng is arguably simply the foremost global African brand and reputation architect, adviser and author. Named one of the hundred Most Influential Africans by New African Magazine, he has summited Mount Kilimanjaro and been to over seventy countries across Africa and the world.

Speaker Thebe Ikalafeng is the founder of the award-winning African brand and reputation advisory firm, Brand Leadership Group, and he has worked on over a hundred diverse brands across the African continent gaining both incomparable perspective and experience on building brands and reputations in Africa, including Brand Ghana and Brand South Africa, Transnet in South Africa, the University of South Africa and the University of Botswana, Zanaco Bank in Zambia, Mail&Guardian Africa in Kenya, the Africa Green Revolution Forum in Tanzania, Ethiopia, Zambia and Kenya, Bank Populaire du Rwanda, and several successful political branding and campaigns for, among others, the late President Atta Mills and President John Mahama of Ghana in 2008 and 2012 respectively, and the Congo Brazzaville Referendum in 2015 too. Brand Leadership has been recognised as Fin Week “Marketing Services Agency of the Year, 2008” and in 2015 Ikalafeng was inducted into the Rebrand Hall of Fame for Excellence in Branding.

In a distinguished corporate career that started in brand management in Colgate Palmolive in New York and concluded as chief marketing officer for NIKE for the African continent and in consulting, speaker Thebe Ikalafeng has won over 75 awards globally in marketing and in branding.

Accomplished speaker Thebe Ikalafeng is also a non-executive director of Mercantile Bank Holdings (a subsidiary of Caixa CGD, the Portuguese state-owned banking corporation and the second largest bank in Portugal), Car Track Holdings, (JSE listed vehicle tracking and fleet management company operating in twenty countries in Africa, Europe, Asia and the US) and WWF South Africa (WorldWideFund for Nature). He is also deputy chairman of South African Tourism and chairman of Brand Finance Africa. He is a member of the Henley Africa Business School and IC Publications (publisher of African Business, New African and African Banker advisory boards. Furthermore, he is a former non–executive director of Foodcorp Holdings and a former Trustee of Brand South Africa.  He is also Founder and Chairman of Brand Africa, and founder of Brand Africa 100: Africa’s Best Brands and Public Sector Excellence.

He has served on all notable industry bodies, including a five year tenure as chairman of the prestigious Loeries advertising awards in South Africa, and as non-executive director of Marketing Federation of Southern Africa and the Direct Marketing Association of South Africa, and vice-chairman of the Brand Council of Southern Africa, and judged leading industry awards locally and globally, including the Loeries locally and also the acclaimed global design award, Red Dot, in Germany.  He is founder of the Africa Network of independent Africa-focused marketing, media & branding agencies across all of Africa.

Widely recognized African speaker Thebe Ikalafeng is co-host of the CNBC Africa Marketing, Media and Money Show and has addressed diverse audiences in most of the leading African and global capitals, and has been featured in global and African media such as CNN, BBC, CNBC Africa, FT, African Business and New African.