A mix of magic, comedy, music, and motivation 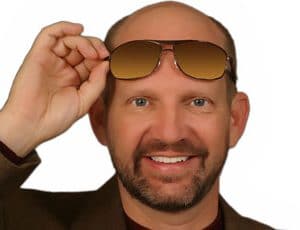 "Billy did a great job delivering our message to the team. He was entertaining while being impactful. We were very pleased and would strongly recommend him to others."

Request fees and availability
Billy has used an atypical blend of comedy, magic, music, and motivation to spread his positive attitude to more than a million people on five continents. As soon as keynote speaker Billy Riggs appears, things on stage begin to disappear! Billy's shows transform hundreds of otherwise ordinary conferences into something truly special.

Billy Riggs has been referred to as “The Dr. Phil of Magic,” and is America’s source for all things attitude!  Through books, television, radio, videos, his useful website (billyriggs.com) and live keynote speeches, Billy has used an unusual combination of comedy, magic, music, and motivation to spread his optimistic attitude to more than a million people on five continents.  A mesmerizing communicator, Mr. Riggs sharpened his uplifting message and speaking skills in the pulpit, founding one of America’s fastest-growing churches at the age of 29.  Though his presentations now are secular, audiences sometimes sense the old preacher in him, stirred by his sincerity and power on the platform.  In 2002, Mr. Riggs received the highest earned award of the National Speakers Association: the Certified Speaking Professional.  Since 1995, he has breathed The Magic of Attitude into people, companies and organizations.

But the goose bumps aren’t always the result of dramatic speeches.  When Billy Riggs appears, things on stage begin to disappear!  By means of world-class magical illusions to drive home his points, Billy’s presentations have transformed hundreds of otherwise ordinary conferences into something truly special.  His quick wit and quicker hands spread laughter and raise morale as the audience learn to reshape their destinies by eliminating their “Grand Illusions” and taking in even grander truths.

How to Achieve the Impossible:

The Power of a PMA!

Billy did a great job delivering our message to the team. He was entertaining while being impactful. We were very pleased and would strongly recommend him to others.

Losers complain when the direction of the wind changes. Winners just set their sails differently to take advantage of it. Whoever adapts fastest reaps the rewards.

Among the esoteric bits of trivium wasting space in this professional illusionist’s mind is the fact that Presto Chango is a contrived magician’s word meaning “fast change.” There could hardly exist a more fitting descriptor for what’s happened in the business world over the past several decades, or for the speed at which individuals must adapt just to survive. Advances in technology necessitate changes in strategy, require unanticipated expenditures and alter personnel needs. As the market swivels from year to year – presto chango! – companies must zig and zag a dizzying rate. Given the reality that change is a constant, and that its pace is likely to accelerate forever, a few tips on dealing with it might ease your daily transformation into the latest, greatest, up-to-date-ist you.

FACE IT WITH A SMILE – In any endeavor, those with a positive attitude fare better than those bitter, dour souls who see only the dark clouds. About ten years ago I had a neighbor (in Austin, Texas) who learned that her company was moving to a small town in Minnesota. While other middle managers hung their heads as they contemplated uprooting kids, packing boxes and brutalizing winters, she instead shouted “Woohoo! Let’s do it!” It’s not that she didn’t prefer to stay in Austin and keep her kids in their same schools; it’s just that she recognized the decision was already made so she chose to face it with enthusiasm. Guess who went to the front of the line for promotion to upper management?

BE THE VICTOR, NOT THE VICTIM – Playing the victim is almost a pastime nowadays, and the greater the claimed victimhood, the higher one’s perceived status and the greater the sympathy received. But seeing oneself as a victim is deadly. Any gains earned by perceived victimhood are more than erased by its debilitating effects on the spirit. Workers who view themselves as helpless victims of change cower in fear just when they ought to steel themselves and raise their game. Far better it is to interpret change as a challenge to become your absolute best, one that adrenalizes and motivates you, and dares you to develop new skills.

WELCOME IT AS AN OPPORTUNITY – If you’ve ever felt trapped on the crowded ladder of success behind those who arrived before you and aren’t likely to go anywhere soon, the constant swirl of change represents a golden opportunity to leapfrog ahead of them. By quickly mastering the new skills demanded by the changing landscape, you can instantly become more valuable than those with greater seniority or a higher rung in the organization.  When college basketball added the three point line, little guys suddenly had a new opportunity to improve their worth on the court. When the internet was invented, those who dove in and mastered networking rose instantly to the status of “indispensable.” Change is not a punch in the nose. It’s that “kick in the pants” we all need from time to time.

Do these three things, and  – PRESTO CHANGO! – the tragic becomes magic!

"Billy did a great job delivering our message to the team. He was entertaining while being impactful. We were very pleased and would strongly recommend him to others."