"It is all about people" 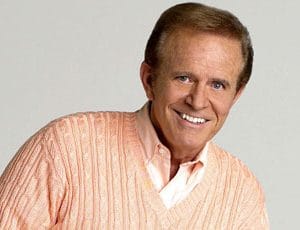 Emmy award-winning TV game-host and one of a kind focusing on enhancing people skills, relationships and humour

Request fees and availability
The five-time emmy award winning host of the Newlywed Game, keynote speaker Bob Eubanks, is one of the most wanted motivational presenters. Eubanks talks from his long personal interaction with contestants on game shows such as the Newlywed Game, as well as his experience as one of Hollywood's most successful entrepreneurs. Eubanks focuses on enhancing team building,  people skills, relationships, and the use of humor as a communication skill.

There are successful DJ’s like Ryan Seacrest, Rick Dees and Casey Kasem. There are artist managers who take unknown characters and make them big stars. There are concert promoter like Live Nation and AEG. There are TV producers who are known within the industry and there are TV personalities like Tom Bercheron, Bob Barker, and Pat Sajak. There are people who have won multiple Emmy’s, and there are people that have a star on the Hollywood Walk of Fame. However, there is only one person, in the entire entertainment industry, who has done it all.

He was one of the top Rock and Roll DJ’s in Los Angels at the number one radio station for seven years. He managed and crafted the careers of Dolly Parton and Barbara Mandrell. He produced some of the biggest concerts ever with the Beatles, Rolling Stones, Bob Dylan, & Merle Haggard. He was one of the top TV producers, having produce network and syndicated game shows and variety TV. He hosted some of TV most successful daytime programs. Such as Card Sharks and The Newlywed Game. He is the only game show personality to host the same format with original programming for five decades and TV Guide named him one of the top five Game Show Hosts of all time. He’s won five Emmy’s including a lifetime achievement award and became the last person to receive a star on the Hollywood Walk of Fame in the twentieth century. Yes, he is one of a kind, he is Bob Eubanks.

Bob Eubanks Host of the Newlywed Game, is now a well-known Keynote Speaker to corporate America. Working with companies such as Southwest Airlines, John Hancock Insurance, & Wachovia Bank just to name a few. Each year Bob can be seen all over the world, hosting the Tournament of Roses New Year’s Day Parade, for Tribune Broadcasting, The Travel Channel and Hallmark Channel.

• One of the highest-rated television shows in Southern California

• Bob has produced television shows for all three of the major networks and for the syndicated market.

Producer credits include: The Toni Tennille Show, Buddy Hackett’s You Bet Your Life, All Star Secrets, The Guinness Game and Infatuation

In 1964 & 1965 Eubanks produced The Beatles concerts at the Hollywood Bowl. This was the beginning of a 20-year concert promotion career that included:

During that time Eubanks became one of the largest concert promoters in America, producing over 100 concerts per year nationwide. Oh and by the way… he’s a heck of a cowboy! I guess he really is ONE OF A KIND!

It’s All About People

The Not so Newlywed Game

“The Not so Newlywed Game” is a live replica of the television game using four married couples that are either newlyweds or feel like newlyweds. (In other words, it doesn’t matter how long they’ve been married.)