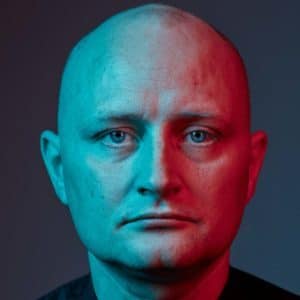 Request fees and availability
Ulrich had never expected or hoped that he would become a famous face worldwide, but with the Mole - Undercover in North Korea, it became the back of the medal he would have preferred to have been without.

Ulrich Larsen was born in Slagelse in Denmark, and grew up in West Jutland and trained as a chef. After graduating, Ulrich did his military service in the Navy, and then worked in the restaurant industry as Restaurant and Deputy Manager at several restaurants. In 2005 he settled down with his wife and two children.

Namely, the choice to infiltrate North Korea and document everything with a camera. In the year 2010, Ulrich was forced to retire early due to chronic illness. During his long hospitalizations in connection with the treatment he did not give up his life, but started having a great interest for the mysterious North Korea.

With great interest he saw the film The Red Chapel, which was directed by documentary filmmaker and journalist Mads Brügger, whom Ulrich then contacted. Here, the first seed was planted for what would later become the fastest and best-selling Danish documentary, which in addition has won a Robert for this year’s documentary.

Today, Ulrich can look back on an insane journey that lasted from 2010 to 2020. For ten years, Ulrich met and learned about a spy metier from the most experienced operational MI5 and CIA agents. Following the revelation, a panel of experts at the UN has convened Ulrich to share his experiences.

Join an ordinary man on an unusual journey, when Ulrich Larsen in the keynote tells his surreal and fantastic story as an undercover in North Korea. Why did an ordinary family man from Denmark spend 11 years of his life infiltrating North Korea? What was the motivation, how did he hide the constant lies from his wife all the while traveling the world as a mole – and what now?

Join Europe, China, North Korea, Jordan, Uganda and the United States. Hear Ulrich himself talk about how he got so close to North Korea, something the CIA has tried for 20 years without success.

Get answers to the questions left by the award-winning documentary “The Mole – Undercover in North Korea”. And hear about the CIA course in the United States, the discovery of the arms trade and the production of Methamphetamine. The seconds before the revelation in a basement bunker in Spain, to be undercover among extreme communists and for 10 years play that you are one of them.