Get insights on hacking and using it for a good cause 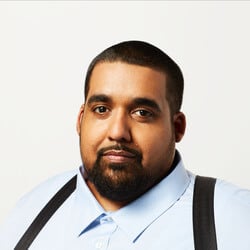 Request fees and availability
Keynote speaker Hector Monsegur, perhaps better known by the online pseudonym Sabu, has been through a lot to get to where he is today. Hector is a former hacker for Anonymous and leader for LulzSec. Today, he has turned his life around and “Sabu” no longer exists.

Keynote speaker Hector Monsegur had a difficult childhood and grew up around poverty and drugs. His mother left him when he was little, and through computers he found a way to escape from his surroundings. As “Sabu” he was part of Operation Tunisia which is said to have started the Arab Spring. After hacking governments, News Corp and huge security firms, the FBI found him and gave him an ultimatum. Either they were going to take his two little nieces away from him or he was going to collaborate with them. Hector chose his family and gave the FBI access to his world, marking the end of his outlawed hacking career.

Today, speaker Hector Monsegur works with credit card companies and networks of major retailers and finds their cyber security vulnerability. While he no longer works as a illicit hacker, he is probably still one of the best hackers in the world. Determined to utilize his talent, Hector Monsegur is now the director of Assessment Services at Rhino Security Labs while also working on a film and book about his life.

Speaker Hector Monsegur has had an extraordinary life so far, and he is a true inspiration and proof that you can change your life. His keynotes are unique and there truly is no one quite like him.

The State of Security

Hector lectures on how Solarwinds is still a problem and how to handle it.

Conversations around storage and recovery

Cybersecurity, a human problem not a systems problem.

Hector discuss his personal experiences on the issue that plagues cybersecurity the most, human error.

This lecture is on general security topics and includes specific software and trends in cyberspace that are popular.

My Journey Into The Cyber-Security Industry

In this autobiographical lecture Hector details how he grew up on the Lower East Side with an aunt that was a major heroin dealer to becoming the defecto head of Anonymous a infamous hacking collective.

Hector recounts how his obsessive curiosity and raw intelligence empowered him to learn about computer systems and eventually infiltrate the most secure targets in the world. autobiographical lecture

What Is It and How Did We Get Here

In this lecture Hector examines the mind and exploits of the hacker of today and past generations. He details the unique climate that allowed for people to become hackers and how this inner world works

In this lecture Hector traces the evolution of the technical and social realities to reveal how these hacks manifested. He also looks at the road ahead to forecast what he see’s as the next generation of hacks.