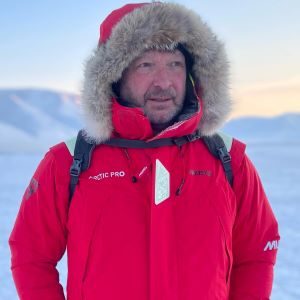 Request fees and availability
Keynote speaker Jim McNeill has over 30 years of experience polar travelling and planning expeditions. He has done this mostly on skis in the middle of nowhere. Jim is a well-known explorer in his field, and he has helped multiple tv and film crews on safety and guiding in extreme conditions.

Jim McNeill has a background in safety, environmental science and fire service prior to becoming a professional explorer in 2006. He also has a passion for leadership and teamwork, as he discovered the importance of these disciplines through travelling to extraordinary destinations with groups of people – when you’re freezing in the middle of nowhere leadership, communication and teamwork becomes your biggest weapon for survival.

In 2001, Jim founded the Ice Warrior Project, which is an organization aimed to train “ordinary” people to become polar explorers and travel to and through remarkable places. The ultimate goal behind the project is to make people see the environmental changes that are happening and have them speak openly about their unique experiences. Jim dreams of developing people and discovering change. He simply wants to foster a better understanding of the world we live in.

With a passion for travelling and exploring unique parts of this world, Jim is an advocate for environmental change. In 2006, he was on ITV News to report the reality and seriousness of climate change directly from Arctic Ocean to an international audience.

When Jim is not polar exploring, supplying gear to tv crews or planning out safety routes for the next Hollywood movie, he is a fantastic and engaging keynote speaker. He strives to get the best out of everyone, whether it’s in the Arctic or in an organization. Soon, Jim plans to attempt to reach the very centre of the Arctic Ocean – the Northern Pole of Inaccessibility. If he and his team succeed, they will be the very first people to ever do so.