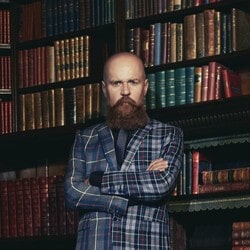 Request fees and availability
Keynote speaker Alexander Bard’s presentations are as diverse as his career has been throughout the last thirty years - from crossdressed bubblegum pop singer to serious university lecturer. Alexander is a unique character and a charismatic speaker. He likes to provoke and makes every talk an interesting journey.

Alexander is a cyberphilosopher, music producer, television show host, and highly sought-after international lecturer. He is the author of the globally successful The Futurica Trilogy – co-written with media theorist Jan Söderqvist, and so far translated to over 20 languages – consisting of The Netocrats, The Global Empire and The Body Machines.

October 2014 sees the release of Alexander’s fourth book with Söderqvist: Syntheism – Creating God in The Internet Age, in which the authors set out to construct a complete new metaphysical system for the digital age, covering everything from the inner existential truths of the new physics to the radical utopian potential of participatory culture.

Alexander studied Economic Geography at The Stockholm School of Economics in the 1980s while building a highly successful international career as a songwriter and record producer. In 1992, he and his business partner Ola Håkansson co-founded Stockholm Records – which quickly achieved global success with bands like The Cardigans, A-Teens, and Bard’s own Army Of Lovers – which went on to become Scandinavia’s biggest independent record company before it was sold to Universal Music in 1998.

Even though he has claimed to be too busy with cyberphilosophy and political and spiritual activism to find the time for any more songwriting, Alexander achieved No 1 hit records in both Europe, Asia and North America as late as 2013. Never afraid of entering the stages himself on which he builds his groundbreaking theories, Alexander has become (in)famous for his controversial television performances as a flamboyant star judge on Swedish Idol.

Alexander has given lectures on the philosophical, sociological, and economic implications of the internet revolution at the Stockholm School of Economics and other academic institutions worldwide since the late 1990s. Having Alexander as a keynote speaker means extraordinary lecturing and not just another predictable power-point presentation. Having made it a habit to talk dressed in haute couture shorts and an impressive fin de siècle beard, Alexander gives impressive speeches and interesting insights into his thinking. He makes an ideal match to enlighten business and management conferences around the world.

Time - The Ultimate Mystery by speaker Alexander Bard at TEDxSSE

What is the essence of cyberphilosphy for you?

Philosophy originally means “the love of wisdom” in Greek. The Greeks in turn borrowed the concept from the ancient Iranians whose 4,000-year-old term mazdayasna means exactly the same thing. A Greek philosopher (or an Iranian mazdayasni) is consequently a person who pursues and collects wisdom to be recited and written down. Like for all other philosophers, this was also my ambition in life from an early age.

A more modern meaning of the term philosophy was formulated by the French 20th century thinker Gilles Deleuze when he said “philosophy is the art of constructing concepts to help us understand the world better”. In this sense, a philosopher is the opposite of a poet, who aspires to make the world ever more complex and ambivalent. Philosophy is a literary art form like poetry, but it is the opposite of poetry in the sense that philosophy seeks to understand and come to grips with the world through text – to “nail reality through words” so to speak – rather than to incessantly confuse humans ever more the way poets and other artists do.

The term cyber in all of this is then nothing but a prefix for the branch of philosophy that deals with technology and its relationship with and affects on humans, through human-technological interaction and through human-to-human communication using various technologies. Unsurprisingly, cyberphilosophy is the discipline within philosophy which has expanded the most over the past three decades, simply because technology and technological change have come to define the society and the age we live in.

An additional aspect of this fact that I certainly don’t mind is that cyberphilosophy has also become the most lucrative way for a contemporary philosopher to make a really good living from his work. So I’m personally doing quite nicely, thank you! As I believe that I deserve to.

First I would of course have to say philosophy, including all the great thinkers from the ancient Greeks and their contemporaries in East Asia via the Enlightenment all the way through to the modern age. Next I would say technology – the sole and incessant motor of change throughout human history. Then I’m of course immensely fascinated with the human being – a fairly constant actor throughout the ages since our genes have pretty much remained unchanged for the past 50,000 years.

However, no matter how fixed he is in himself,  Man is constantly caught in the whirlwind of change simply due to the fact that the human being is the only animal wrapped up in ever faster technological transformation. Add history in general and travelling around the world in particular and you have pretty much summarised the main interests and inspirations behind my work, so far epitomised in four books co-written with Jan Söderqvist: The Netocrats, The Global Empire, The Body Machines and the latest Syntheism – Creating God in The Internet Age, released in October 2014.

I travel around the world and speak to all kinds of audiences about philosophy, technology, communication and what kind of future awaits us. But what makes this work especially unique is actually when I get to look into people’s most farfetched and abstact hopes and imaginations – which philosophers and futurologists increasingly have to do – then I also get to look inside the deepest and often most sensitive areas of both individual human lives and organisations and institutions.

And it is fascinating how different people and their environments come across when being observed and interacted with from inside their deepest positions. I often feel like a kind of mental surgeon. After all, it is precisely the parts that people, organisations and institutions are unable to see inside themselves which I am hired to expose to them. It is in this sense that my work and my travelling can never cease to amaze me. The depths of the human psyche are truly infinite.

As a speaker you claim to give not just another predictable power-point presentation. What does this mean for your audience?

I worked successfully in the international music industry for 25 years. And one thing I can assure you of is that a power-point presentation at a business conference would be regarded by music industry executives as hardly more valuable than a playback miming performance by a musical artist.

So I skipped the power-point presentations during my speeches some 15 years ago and decided that I would much rather speak assisted by a whiteboard with pens or even a blackboard with chalk than having a glitzy but pre-arranged and therefore utterly predictable power-point presentation behind my back. This way I can interact more freely with the audience during my speeches and make it truly participating rather than just treat it like a bunch of passive students with an authoritarian teacher, the way most international speakers unfortunately still do.

What kinds of clients have you worked with in the past?

My clients include major corporations going through technological change, especially multi-level digital transformation. There are also many organisations and institutions battling with globalisation and digitalisation. I meet with and teach young people like students and internet start-up entrepreneurs on how to understand and communicate and collaborate with the financial establishment and with network and marketing expertise. And I then teach their parental generation in return on how to tap into the digital youth’s ingenuity.

In this department, my own 25 years as a highly successful entrepreneur in the international music industry obviously adds rare but much needed weight and credibility to my arguments. But I always safeguard my own curiosity, it is my best asset of all, being constantly involved first-hand in new entrepreneurial projects myself. This is also where my current involvement in the fast-growing Syntheist Movement comes to the fore. Like any good teacher, I take pride in always first practicing what I then teach. 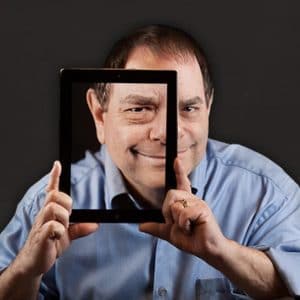 Author and educational speaker working on how to use digital tools wisely in business, in school, and in life

A world-renowned thought leader, visionary, and generator of new ideas, Marc offers open-minded executive and leaders—on every continent—new and better ways to move into the future. He helps leaders think, feel, and act differently regarding...