Informative and inspiring keynotes on the solar system

Request fees and availability
Keynote speaker Carolyn Porco is an American planetary scientist known for her work in the exploration of the outer solar system. Porco is the Director of the Cassini Imaging Central Laboratory for OPerationS (CICLOPS) at the Space Science Institute in Boulder, Colorado. Her scientific research is presently focused on planetary rings and the Saturnian moon, Enceladus. She is a noted speaker and has presented twice at the TED conferences.

Carolyn Porco’s work began with her imaging work on the Voyager mission to Jupiter, Saturn, Uranus, and Neptune in the 1980s. She leads the imaging science team on the Cassini mission now in orbit around Saturn, and is an imaging scientist on the New Horizons mission launched to Pluto on January 19, 2006.

Porco is the Director of the Cassini Imaging Central Laboratory for OPerationS (CICLOPS) at the Space Science Institute in Boulder, Colorado which is the center of uplink and downlink operations for the Cassini imaging science experiment, and the place where Cassini images are processed for release to the public.  She is also an Adjunct Professor at the University of Colorado in Boulder.

Porco received her Ph.D. degree in 1983 from the California Institute of Technology in the Division of Geological and Planetary Sciences. In the fall of 1983, she joined the faculty in the Department of Planetary Sciences within the University of Arizona; the same year she was made a member of the Voyager Imaging Team.

She was a tenured professor at the University of Arizona for 10 years and won several University awards. She was a finalist for the Five Star Faculty Teaching award … a campus-wide student-nominated, student-judged award for outstanding undergraduate teaching.

She has co-authored over 100 scientific papers in the planetary sciences, including a large suite of results on the atmosphere, satellites, and rings of Saturn from the Cassini imaging experiment.

She has been an active participant in guiding the American planetary exploration program through membership on many NASA advisory committees. In 2001-2002, she served as the Vice Chairperson of the Steering Group for the Solar System Decadal Survey, sponsored by the National Academy of Sciences and NASA.

She has made many web, radio and television appearances explaining science to the layman, including appearances on the MacNeil/Lehrer Newshour, CBS’ “60 Minutes”, Peter Jennings’ documentary “The Century”, and TV programs on planetary exploration such as “Cosmic Journey: The Voyager Interstellar Mission and Message” on A&E, “The Planets” on the Discovery Channel, and many documentaries on the Cassini mission. Between 2005 and 2007, Porco was a regular CNN guest analyst and consultant on astronomy and planetary exploration. Her popular scientific writings have appeared in a variety of publications, including the Guardian, The Sunday Times (London), Astronomy, Arizona Daily Star, Sky & Telescope, American Scientist, Scientific American and New Statesman. She is the creator/editor of the CICLOPS website http://ciclops.org where Cassini images are posted for public consumption. She is the CEO of Diamond Sky Productions, a company devoted to the scientific, as well as artful, use of planetary images and computer graphics for the presentation of science to the public. For her skill and passion in promoting science to the public, she was awarded the Carl Sagan Medal for Excellence in the Communication of Science to the Public by the American Astronomical Society in 2010.

She is a noted public speaker and has presented twice at the TED conference, once in 2007 and again in 2009.  These two presentations are among the most popular on the TED website.  She opened the May 10, 2008 worldwide multi-media event known as Pangea Day with a speech illustrating humanity’s cosmic place.

In 1999, she was selected by The Sunday Times (London) as one of 18 scientific leaders of the 21st century. In 2008, she received the Isaac Asimov Science Award by the American Humanist Association, and was chosen by Wired Magazine as one of 15 people the next President of the United States should listen to. In 2009, she was awarded an Honorary Doctorate of Science from Stony Brook University and the Lennart Nilsson Award for excellence in scientific photography, and was chosen as one of fifty people who matter by New Statesman.

She was responsible for the epitaph and proposal to honor the late renowned planetary geologist Eugene Shoemaker by sending his cremains to the Moon aboard the Lunar Prospector spacecraft in 1998.

She was personally invited by Carl Sagan to be the character consultant on the Warner Bros. movie Contact based on the novel by Sagan, and she was the science advisor on the 2009 Paramount Pictures film Star Trek. Asteroid Porco 7231 is named in her honor.

Could a Saturn moon harbor life? by speaker Carolyn Porco

Flies us to Saturn by speaker Carolyn Porco 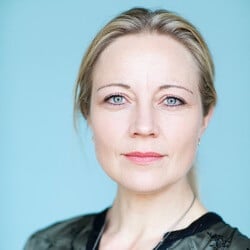 Thought leader, social scientist (M.A.), leadership trainer and expert and pioneer in the field of neuroscience