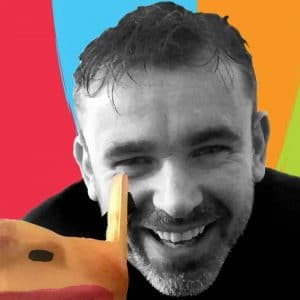 Happiness expert using ventriloquism to give exciting and unique talks on motivation, happiness and success

"I commend him strongly to you. His highly original contribution to the field of social and emotional intelligence is attracting a great deal of attention."

Request fees and availability
Everyone lives in a box, our keynote speaker Marc Griffiths gives keys that help people get out, get happy and get successful. He is inspirational and hilarious! If you want happier employees or students and outstanding new results, then Marc is for you! He presents to business and schools.

A happiness expert with a humorous performance style, Marc Griffiths uses ventriloquism to give exciting and unique talks. However, amusement is not a replacement for content; Marc’s talks are full of inspiration and wisdom, leading his audiences to get happy and achieve their dreams.

Marc’s father once said to him “Marc, you can never encourage people enough!” and this has resonated deeply with mark, who has been a speaker for over 20 years and travels the world giving talks with the goal of taking his audience from A to B, from Apathy to Buzzing. At the end of a session, Marc’s audiences leave inspired, motivated, encouraged and armed with the wisdom needed to get great results!

As well as speaking to adult & corporate audiences, Marc also works with children. Since children are the most influential age group, Marc is proud of the fact that he is one of the top children’s speakers. He has visited thousands of schools and run multiple educational campaigns.

As a multinational award-winning entrepreneur and top entertainer, Marc has spoken in 5000 venues to over a million people. As a motivational speaker he has researched, written and spoken for 25 years, speaking to all types of audiences on the subjects of Happiness, Personal and Professional Development. Self-Esteem & Living with Purpose. He runs a weekly video podcast on happiness and his latest book is entitled, “Get Happy: Make your dreams come true now!” Marc Griffiths is also the author of “Dream Stealer” which is a fun book that inspires readers to achieve their dreams

GET OUT YOUR BOX! Get out, Get Happy and Get Successful!

This keynote is for leadership that aims to motivate employees. Employees that need encouragement and motivation within their work place and organizations that want to better the work environment and productivity of their workforce.

TOO SHORT TO BE SMALL - live with purpose! Happiness is free but your dreams are not.

There's GOLD in you!

Includes Puppets:  Kevin who learns to take personal responsibility for his life. He can’t blame his pirate friends for his actions anymore. He learns to make good choices and believe how special he and others are.

Apart of this keynote children will learn:

I commend him strongly to you. His highly original contribution to the field of social and emotional intelligence is attracting a great deal of attention.

In 26 years that was the best thing that i've ever had visit my school!

My face hurts from laughing. I feel so much better about myself after watching you speak. I cant wait for the rest of the day! It was priceless!

Your Mountain Top is Calling You

There is a team building retreat center in the Alps where businesses send employees to bond by climbing together. Interestingly, the same routine happens every day.  Excited new walkers arrive, pull on their boots, gloves, and backpacks, and ascend up the mountain.  Around lunchtime they come to what is known as the ‘Half Way House’. Throwing their backpacks on the floor, they all pile into the lounge to enjoy the piano, beer, and log fire. When lunch is over, and it comes time to put on their boots again, the majority of walkers decide they’ve had enough and happily choose to keep partying, while the smaller group head into the snow and back up the mountain.

At around 4 PM the walkers reach the peak and ring the summit bell. The group who chose to stay behind swarm out onto the Half Way House balcony and gaze up at their friends waving down at them from the summit. The party atmosphere instantly changes to one of silence and regret, with everyone having the same overriding thought, ‘That could have been me!’

Maybe it’s a half-way point in your life. The good news is that most goals are scored in the second-half of the game. It’s time to get motivated again. It’s time to dream, and to set new goals. You’ve been stuck at Half Way House too long. Your mountain top is calling you!

“That was a terrific blog… even if he did say so himself!”  Kevin the puppet

Author of ‘GET HAPPY – and make your dreams come true NOW!’

What do you gain personally from being a public speaker?
Marc: That it’s a privilege! When I get to the end of my life the greatest thing anyone could say about me is that, ‘Marc changed my life!’ Stepping out in front of new audiences is also personally challenging and really exciting!
Kevin: I like the TV in the hotel room!

How do you tackle life’s obstacles?
Marc: I see obstacles as giants. The reward is always on the other side of your giant. Giants keep others away from the reward. When seen this way, obstacles move from being problems to being wonderful opportunities!
Kevin: I sleep and hope they go away!

Which is harder: motivating yourself or motivating others?
Marc: Motivating myself. Motivate means ‘to move’. No-one wants to be told what to do. But if  they see me moving myself then I hope that that will be inspirational to them, so they can think, ‘If he can do it then so can I!’
Kevin: I motivate Marc!

What got you started on ventriloquism?
Kevin: Aliens came and beamed him up when he was bored at school. They taught him the ancient art of ventriloquism and then dropped him back to earth several years later. He was a bit freaked out by it all and thought he better not let them down after they’d been to all that effort, so he started talking to himself!
Marc: That’s maybe slightly exaggerated!

Who or what inspires you most?
Kevin: Myself. I am awesome!
Marc: My dad. He’s the most humble person I’ve ever met. He once said, ‘People can never get enough encouragement!’ So true. I try and live by that and encourage people whenever I can, whether that’s in a talk or when talking to the checkout lady!

Do you have a favorite experience from your speaking career?
Marc: Yes! The really big moments, like when I stepped on Britain’s Got Talent in front of Simon Cowell. It doesn’t matter how it goes, each big moment is enlarging. I also like hearing what effect I had. After one talk a student came up to me and said, ‘I don’t remember you speaking, but I remember your orange haired puppet called Kevin, who made me laugh when I was 10 and it gave me hope when my parents were divorcing!’
Kevin: I am awesome!

"I commend him strongly to you. His highly original contribution to the field of social and emotional intelligence is attracting a great deal of attention." 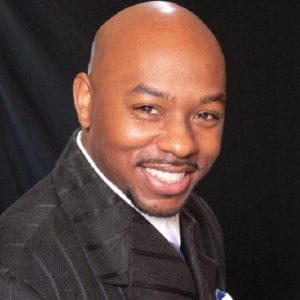 Comedian, keynote speaker and author with a unique message of how to develop leadership skills and increase sales

In the U.S. and throughout the world, former television and radio host, keynote speaker William Hale has been performing his unique brand of DJing, Comedy, Keynote & Corporate Speaking, Business Consulting and Laughter Therapy for over 15... 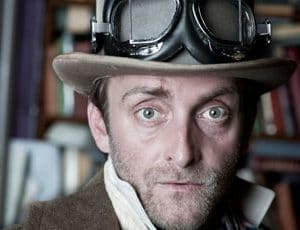 Comedian, adventurer and presenter entertaining audiences world-wide with his fascinating and hilarious talks

Keynote speaker Tim Fitzhigham is a man of many talents. A comedian, adventurer, author, and actor, he is the proud world record holder for being the only person in history to row the English Channel in a bathtub. He is a popular after-dinner...