Real, raw and humorous keynotes based on personal stories

Request fees and availability
Keynote speaker Tom Coverly, also known as “The Illusionist”, is a professional comedian and motivational entertainer. He has performed for millions around the world and is a sought-after speaker for schools for his anti-bullying talks but has also had great success in the corporate world.

As a kid, Tom was smaller than his classmates, and he quickly became a victim to bullying. He grew up in rough neighborhood, and he ended up going down the wrong path of stealing, fighting and drinking. He felt the consequences of his life until a caring person spoke truths into his life.

Today, speaker Tom Coverly has found purpose in his life. Tom keeps his keynotes real, honest and raw. With an added effect of comedy and illusion, they never fail to entertain while sending a true message and breaking down even the toughest heart. Tom Coverly’s “Destroy Illusions Tour” has become one of the most requested school assemblies in America. While being a popular speaker for schools, Tom has also had big success within the corporate world and past clients include Warner Brothers, Arby’s and Burger King.

Tom tackles important issues that you can’t afford to avoid. Bullying in school and at work can do serious damage to the culture and individual. Tom Coverly breaks down the illusions we tell ourselves everyday while engaging and connecting with the audience like few can do.

Destroying Illusions in the Workplace

What’s In Your Hand

Over a decade ago, I asked a friend to think of an out of the box idea that I could do to reach people on a broad scale. He came up with the idea of mixing my public speaking with my hobby of making people laugh and entertaining with magic tricks. I told him it was a crazy idea and I came up with a million excuses to why it would not work. He encouraged me to create a website and to start with my connections of a handful of friends around the country. To give credit where credit is due, I strongly believe God open up the doors for me to speak/perform in 38 states the very first year. Ten years later, I have spoken to nearly 3 million people.

The biggest challenge is on the performance side of what I do. I have performed on gym floors to America’s biggest stages. I have learned to be flexible and that though there are certain expectations I have to create a professional show or event, that I am there to ultimately serve the client. I have learned early on to be a servant from the moment I walk into the door, to the time I leave.

What would you like to achieve in the next 5 years?

One of the goals I have is to write a book on the biography of my life.

Who and what inspires you the most?

How are your keynotes unique?

Most people are visual learners and love to laugh. My comedy and magic is a huge part of my presentations. I have learned from the moment you walk on stage, people have you evaluated within the first 10 second whether or not they will listen to you. Starting off my show with audience participation, laughter and a magic trick or two that entertains has certainly set me a part from thousands of other speakers. Most importantly, I speak from the heart and choose to be raw, real & transparent and have noticed that people love authenticity.

Do you have a favorite experience from your speaking career?

My favorite performance experience would be Warner Brothers hiring me to entertain the entire cast of the Batman vs Superman Movie. My favorite speaking experience would have to be one that was in the midst of a communities heartache and pain. It is not my favorite because of their pain, but because of the results of the hope that I had the privilege to share with this hurting community. This small town experience 6 suicides in less than 6 months, including a father who shot himself with the same gun his teenage son shot himself with just two weeks prior.

I will never forget this older couple who hugged and sobbed on my arm after my presentation and after composing themselves, began to thank me for coming to share a message of hope and sharing my comedy and illusion show and allowing their community to heal through laughter. This couple was the mother and father that lost their son and grandson within two weeks of each other. A memory of thankfulness, I will never forget. 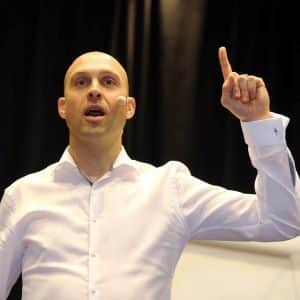 Luke Tyburski captivates, entertains, and leaves his audiences challenging their own mental health beliefs & personal limitations. His stories are mind-blowing & the actionable knowledge he delivers is truly insightful - Luke Tyburski is an...