A journey into the future 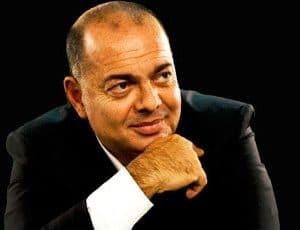 Our speaker Vito Di Bari maintains a global reputation of excellence as the word’s premiere futurist and innovation strategist, forecasting trends in business innovation based on new technologies. Vito Di Bari was the Innovation Designer for the World Expo 2015, Executive Director at United Nations’ UNESCO, in Paris, and Professor of Design and Management of Innovation at Polytechnic University of Milan. Vito has published 11 books on innovation and hosted the show “Live from the Future” on Discovery Channel. Named the Big Thinker of 2014, he is considered the thought leader of the tech-driven design movement Neo-Futurism, where architects like Zaha Hadid and Santiago Calatrava belong to.

Vito Di Bari’s keynotes are anything but ordinary, due to the combination between the depth of science and the magic of entertainment. His keynotes are founded on a solid scientific approach, including the unveiling of new technologies, and reveal a detailed forecasting of medium-term business trends.

His background as United Nation’s UNESCO Executive Director and university professor is harmoniously paired with his showmanship style to create memorable storytelling using custom films on theatrical screens, and the occasional coups de theatre, to show us how our lives will change in the next 5 to 15 years. Tailored to each individual event, he recounts the stories of the evolution of individual business segments, uncovers the future way of working in those industries, as well as the future competition in those markets. Telling stories of individuals responsible for pivotal moments throughout history while echoing the works of artists, writers, and philosophers, all narrated as an enchanting tale of the never-ending challenge of human civilization.

The artistic speaker Vito Di Bari throws in some metaphors, paradoxes, and jokes…a lot of jokes. Live interactions with the audience to sprinkle in extemporaneous brainstorming, some blitz surveys, Q&A’s, and even dancing. Add a dash of live tweets to and from the people in the room, tweeting infographics and receiving back comments in real time. This is how Vito creates a recipe for success with his solo performances.

LEAD THE BUSINESS COMPETITION OF THE FUTURE

A perfect inspirational moment for conventions of companies going through a transformation process, guided by leaders with a vision to share, launching new innovative lines of product, announcing a relevant evolution (such as a merger, acquisition, joint venture, partnership), celebrating its anniversary.

A JOURNEY INTO THE FUTURE OF MARKETING

This is much more than a keynote, it’s a multimedia feast of positive icons and smart solutions to increase the quality of life of the future dwellers.

Vito Di Bari's keynote is the best I ever seen. He goes through the next business trends, the emerging technologies and how they will change the way we work and tells how to use this knowledge to compete in the business arena. The, the gran finale: Vito shows the future as it will be on big screen and comments it live with symphonic music in the background. The effect is spectacular, the audience is fascinated and inspired.

Vito Di Bari give us an interesting perspective about the Paradox of Automation, full of humor and sense, with interesting new concepts that make us want to lead this evolution instead of worry about it.

Vito Di Bari captivates his audience with storytelling, amazing videos. Vito brings priceless insights for propelling companies and organizations into the future, wielding fresh prospectives for business objectives, products, service and clientele. Each of his keynotes is specifically tailored for each client and he always gives 150% exceeding client's expectations. It is always a pleasure to work with him.

I love his creative ideas, the metaphorical imagery, the visual boldness and the unique approach.