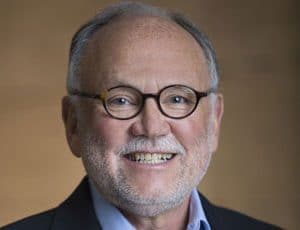 Request fees and availability
During his many years as a senior executive at Starbucks, keynote speaker Howard Behar helped establish the Starbucks culture, which stresses the importance of people over profits. He has coached hundreds of leaders at every level and he has helped the company grow into a world-renowned brand. Today as a keynote speaker he reveals his ten principles that guided his leadership and success—and not a single one of them is about coffee.

Under Behar’s leadership, Starbucks opened its first location in Tokyo in 1996. Following this historic opening, over the next three years he introduced the Starbucks brand across Asia and the United Kingdom. After a two-year hiatus, he returned to Starbucks as President of Starbucks North America until his retirement in January 2003. He was a director of the Company from 1996 to 2008.

Before his days at Starbucks, speaker Howard Behar was working in the furniture business where he discovered it was the people he loved, not the furniture. His sense of the customers as people, his concern for their needs, and his experience of being a part of people’s dreams for their homes and their lives helped him make the next successive moves in his retail career.

A frequent speaker on the topics of organizational and personal leadership, Mr. Behar serves on several profit and non-profit boards, including Anna’s Linens, Sterling Savings Bank, Education Elements and the advisory boards of Anthos Capital and Roadtrip Nation. His non-profit commitments are to the University of Washington Foundation, Global Compassion Council and the Biller Family Foundation. Howard Behar is sponsoring a joint educational initiative with the University of Washington School of Social Work and the Business School. He also served as the Fritsky Leadership Chair 2008-2009 at the UW’s Foster School of Business. He lives in Seattle with his wife, Lynn, and he loves boating and spending time with his children and young grandchildren.

As a recognized speaker Howard Behar presents keynotes and leads thought-provoking Q&As with large and small audiences. Howard is committed to exchanging ideas and creating dialogue around the ways we lead others and ourselves in organizations today. He also addresses the role personal leadership plays in our individual lives. He speaks to corporate audiences, educational institutions, boards and governance groups, and non-profit organizations seeking to challenge and inspire themselves.

Additionally, keynote speaker Howard Behar is also the author of the book “It’s not about the coffee”, where he discusses the importance of building trust, telling hard truths, thinking independently, and more.

Howard Behar "People are not Assets"