Get to know the power of positive 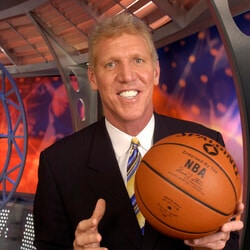 Request fees and availability
As entertaining as he is insightful, speaker Bill Walton is renowned as one of the best speakers from the world of sports. As a speaker Bill Walton brings passion to the stage and inspires audiences with tales from an improbable life in sport and beyond.

Why you should book speaker Bill Walton:

“Those not willing to risk going too far will never know how far they can go.” -Speaker Bill Walton

The nation’s top college basketball star, Walton’s professional career began when he was the number one overall pick in the  NBA Draft by the Portland Trailblazers. He was a member of their championship team . Nine years later, he earned another championship title, this time with the Boston Celtics. He played with the Trailblazers, the San Diego Clippers, the relocated Los Angeles Clippers, and The Boston Celtics.

Throughout his great history of his accolades, Bill also suffered from multiple injuries throughout his basketball career, and a stuttering drawback, speaker Bill Walton overcame many of the strides that were used to set him back. Following a celebrated college basketball career, Bill went on to have a Hall of Fame NBA career. After basketball, he pursued his dream job as a sports broadcaster – but first had to overcome the lifelong stuttering affliction. And then, in 2008, Bill endured risky back surgery to repair the damage done early in his basketball career. Through it all, Bill’s determination and positive attitude carried him through.

After retiring from basketball, Bill began his broadcasting career in 1990 as an analyst for the then Prime Ticket Network. Bill worked for CBS Sports in the early ’90s and then for NBC for many years, including work in Atlanta and Sydney Summer Olympic Games. Over his career, he’s also done broadcasting work for ABC, ESPN, FOX, MSNBC, Turner Sports, KCAL, NESA, and the NBA. Bill has been nominated for numerous Emmy Awards and won an Emmy for Best Live Sports Television Broadcast. The southern California Sports Broadcasters Association has several times honored Bill with the Best Television Analyst/Commentator Award. In 2009, he was named one of the top 50 sports broadcasters of all time by the American Sportscasters Association.

Speaker Bill Walton is active with many organizations and charities. For his efforts, he received the NBA Retired Players Association Humanitarian Award. He is executive chairman of Connect SD Sport Innovators (SDSI), a non-profit, business-accelerating, trade organization that connects and drives the growth of Southern California’s vibrant sports economy by offering innovative programs and services for startups, mature companies, and service providers. Walton is also a board member for the Junior Seau foundation. Bill is also involved in numerous Internet ventures, providing content and business acumen.

Bill Walton is author of Back from the Dead and Nothing but Net. He currently resides in his hometown of San Diego with his wife, Lori.

Leadership Lessons From the Hardwood

Basketball icon Bill Walton was part of legendary college and NBA championship teams: UCLA, the Boston Celtics and Portland Trail Blazers.  He was also part of the last place San Diego Clippers. To Bill, the difference between winning and losing was leadership. The best coaches knew how to get the best out of their players.

In Bill’s career no one was better than legendary UCLA coach John Wooden. An English teacher who coached on the side for extra money, Wooden focused on the fundamentals. He never talked about winning – and rarely even mentioned the opposing team.  Wooden did insist that players work together, not be selfish, execute flawlessly, and be accountable for doing their best. Armed with that approach Wooden went on to win 88 consecutive games (a men’s collegiate record which still stands) and ten national championships.

Bill played on two championship teams under the revered UCLA coach John Wooden. Bill’s teams contributed to the Bruins’ 88-game winning streak, still the record in men’s basketball more than 40 years later.  Bill was also a two-time NBA champion; with the Portland Trail Blazers and Boston Celtics. Of course, it’s not possible to appreciate great teamwork unless you’ve seen the other side of that coin, and Bill experienced that as well during his time with the San Diego/Los Angeles Clippers.  That experience gave him a strong understanding of the building blocks necessary for great teams to develop and function.

After Bill’s playing days ended, broadcasting offered him the perfect perch from which to watch extraordinary teams perform. Throughout his business endeavors, Bill applied the teamwork lessons he learned from sports with astonishing success.

Tales of Injury, Rehabilitation, and Recovery

After 37 surgeries, basketball superstar Bill Walton knows a thing or two about sports injuries and sports injury rehabilitation.  He has the dubious distinction of being the most-injured player in NBA history.  In his 14-year pro career Bill missed a total of 9½ full seasons due to injury.  Even so, he was inducted into the Basketball Hall of Fame and won numerous awards and honors for his brilliant play.  Imagine his impact on the game had he stayed healthy! Bill’s feet, knees, and back – the foundation of his ability to perform as an athlete – let him down.   His most serious surgery was to straighten his spine after spending 2½ years on the floor of his home in agonizing pain – literally unable to move and contemplating suicide.