Bring your business to the next level 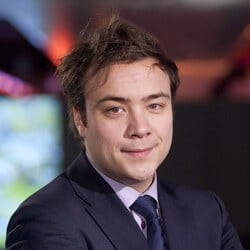 Request fees and availability
Keynote speaker Danny Mekić is a Dutch speaker and entrepreneur. As founder and CEO of several companies Danny's focus lies on technology and innovation consultancy. Danny Mekić is a  authority in the field of technological developments. Danny can speak about the current trends on digitalisation and innovation as well as ethical and legal aspects, such as privacy.

Highly interested in enterpreneurship, Danny Mekić already started working on various project from his parents’ attic at the age of 15.  Committed to business he decided to quit high school and focus on his future plans. At current, Danny Mekić is one of the most successful speakers on technology, innovation and entrepreneurship in the Netherlands and one of the most popular keynote speakers in Europe.

A keynote of Danny Mekić will bring you:

Engaged in the world of innovation and tech, Danny Mekić is running his third big company called NewTeam. The company was founded in 2011 and is an international consultancy agency that focuses on strategic boardroom consultancy to large organizations on technology, media and communications, and is specialized in disruptive innovations and new business models. NewTeam works for 40 of the 100 biggest organizations in The Netherlands and several government agencies, but also has customers in seven other countries in Europe and America.

Although Danny Mekić quit school, he was admitted to the University of Amsterdam in 2007, where he studied the honoursbachelor Jurisprudence with elective courses in Psychology and Economy. In 2008, Danny Mekić finished his education as a mediator and  two years later was appointed as a chairman of the advisory board of the Dutch Ministry of Education, Culture and Science and the Ministry of Economic Affairs. Through this position, he is given the opportunity to actively stimulate entrepreneurship in the Dutch educational system.

Danny Mekić engages with his audience and gives interesting insights on current business development and technological innovation. In his speaking Danny is extraordinary professional and well prepared. All of his talks can be tailored to the clients needs.